I can think of few gifts more gratifying than having one’s work set to music, and thus I’m so pleased to be able to share the piece “Internodium,” where composer Sam Nichols takes an excerpt from this story of mine (or maybe it is a prose poem?) and transforms it into something utterly new.

I was fortunate to be able to interview composer Christopher Cerrone, whose musical adaptation of Calvino’s Invisible Cities sent me reeling in the best possible ways.

The resulting conversation is up at the Tin House blog: 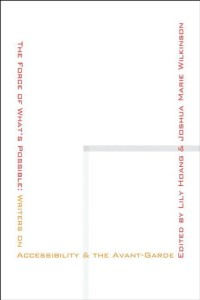 To mark the release of The Force of What’s Possible: Writers on Accessibility and the Avant-Garde, edited by Lily Hoang and Joshua Marie Wilkinson (Nighboat Books, 2015), I answered some of Lily’s questions about innovative writing practices and the like, and the folks at The Volta were kind enough to publish it along with a bunch of others from the book itself. It features an incredible lineup of writers, and I’m glad to have the opportunity to throw my iron into the furnace of the possible.

My flash piece “The Other Work,” which I debuted live at the Brattleboro Literary Festival, found a home in Wigleaf, and can be read at http://wigleaf.com/201411work.htm.

And if you were on a quest for something else to nosh upon, I dispatched a postcard from a comet, yours truly at http://wigleaf.com/201411thdw.htm.

Thanks, as always, to editor Scott Garson for being such a great master of ceremonies.

The one, the only Nancy Pearl had some tremendously generous things to say about UNDERSTORIES in conversation with Steve Inskeep on NPR’s Morning Edition. Calling the book “her favorite short story collection in recent memory,” she went on to dub the work “elastic realism,” explaining that the book is “firmly grounded in realism,…[b]ut then…stretches that definition of realism into places that we might not think it would go.”

Plainly and simply, I love this characterization and broke into a rather elastic dance upon hearing her.

So grateful for such an in-depth exploration of the book by Lisa Peet at Bloom.

Lisa also asked me some of her own questions, and not the kind one can auto-pilot through. Learn more at

Tomorrow, Saturday, March 16th, along with nine other writers from Grub Street, I’ll be participating in the live writing of a mystery as part of the #TwitterFiction Festival. Follow #grubmurder and watch it all unfold. 9 am EST is when the mayhem begins. Exquisite corpse, indeed…

I’m humbled and thrilled to announced that UNDERSTORIES has been chosen as the winner of the New Hampshire Literary Award for Outstanding Fiction. Congratulations again to all of the other nominees, and to the winners in other categories, many of whom I’m fortunate to have met: Andy Merton in Poetry, Terry Farish in the Young Adult category, Rebecca Rule for Children’s Literature, and Mary Johnson in Nonfiction. The awards were presented at New Hampshire Writers’ Day on March 22nd on the campus of Southern New Hampshire University. I can’t thank the Writers’ Project enough for all of their support over the years!  http://www.nhwritersproject.org/

I’m not sure whether to call this a review or a grand tour; either way, it’s surely one of the most astoundingly in-depth explorations of UNDERSTORIES to date. And it’s also one of those reviews from which I really learned stuff–from the fact that Gauguin painted winter scenes (like the above) to less tangible things about my own stories. Thanks to Karen Carlson for taking it apart and putting it back together so elegantly and eloquently at her blog, A Just Recompense.

Edward J. Rathke threw some great questions to me as part of his 52 Interviews Project at Monkeybicycle. We talked about the gravitational pull of the internet, shorter versus longer stories, the “toymaker moment,” and roughly fifty-two other things. http://monkeybicycle.net/52-weeks-52-interviews-week-48-tim-horvath/