Okay, now I’m going to gush about one of my favorite local entities, the Portsmouth Public Library. They have a top-notch collection that runs the gamut from the big presses to independents like Dalkey Archive, Europa, Coffee House, and Dorothy. They have mahjong every Saturday morning. They run a How-to Festival that this year included how to compost with worms, tie knots, dance the Masala bhangra, and make a firefly(!). And, last but not least, they’ve started their own magazine to capture goings-on, offer book reviews, and profile some of their patrons. Marina Buckler was kind enough to interview me for their debut issue, even though I think I had a few overdue items at the time. You can check it all out, including a literary Mad-Lib, here: (our conversation is on pg. 15): The Parrott Summer 2015. 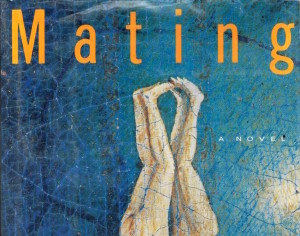 What a pleasure to get to write about pg. 116-140 of Norman Rush’s Mating at the Paris Review Daily, the latest installment in their ongoing Mating Book Club. The journal honored Rush with their Hadada Award for a lifelong contribution to letters at their Annual Spring Revel. Here’s a link to my piece, in which our narrator reveals her secret for never being bored, then heads out into the desert with a couple of donkeys: http://www.theparisreview.org/blog/2015/04/27/6-a-craving-for-silence/

The gorgeous new journal The Square (yep, it’s perfectly square–I checked) which focuses on arts and culture in the greater Portsmouth area, published a conversation between myself and my writer friend Katherine Towler. Katie is the author of, among many books, the forthcoming nonfiction book The Penny Poet of Portsmouth, which Publishers Weekly described as “a beautiful portrait of friendship and writing.” We strolled around the Great Bay Wildlife Refuge and talked about writing and other stuff with bulky binoculars dangling around our necks in case of fortuitous bird sightings that only happened in the parking lot. You can read the entirety of the conversation, minus the quavering in the cold, here: http://www.pageturnpro.com/Mclean-Communications-Inc/65380-The-Square–Spring-2015/index.html#28.

I can think of few gifts more gratifying than having one’s work set to music, and thus I’m so pleased to be able to share the piece “Internodium,” where composer Sam Nichols takes an excerpt from this story of mine (or maybe it is a prose poem?) and transforms it into something utterly new.

I was fortunate to be able to interview composer Christopher Cerrone, whose musical adaptation of Calvino’s Invisible Cities sent me reeling in the best possible ways.

The resulting conversation is up at the Tin House blog:

To mark the release of The Force of What’s Possible: Writers on Accessibility and the Avant-Garde, edited by Lily Hoang and Joshua Marie Wilkinson (Nighboat Books, 2015), I answered some of Lily’s questions about innovative writing practices and the like, and the folks at The Volta were kind enough to publish it along with a bunch of others from the book itself. It features an incredible lineup of writers, and I’m glad to have the opportunity to throw my iron into the furnace of the possible.

My flash piece “The Other Work,” which I debuted live at the Brattleboro Literary Festival, found a home in Wigleaf, and can be read at http://wigleaf.com/201411work.htm.

And if you were on a quest for something else to nosh upon, I dispatched a postcard from a comet, yours truly at http://wigleaf.com/201411thdw.htm.

Thanks, as always, to editor Scott Garson for being such a great master of ceremonies.

The one, the only Nancy Pearl had some tremendously generous things to say about UNDERSTORIES in conversation with Steve Inskeep on NPR’s Morning Edition. Calling the book “her favorite short story collection in recent memory,” she went on to dub the work “elastic realism,” explaining that the book is “firmly grounded in realism,…[b]ut then…stretches that definition of realism into places that we might not think it would go.”

Plainly and simply, I love this characterization and broke into a rather elastic dance upon hearing her.

So grateful for such an in-depth exploration of the book by Lisa Peet at Bloom.

Lisa also asked me some of her own questions, and not the kind one can auto-pilot through. Learn more at

Tomorrow, Saturday, March 16th, along with nine other writers from Grub Street, I’ll be participating in the live writing of a mystery as part of the #TwitterFiction Festival. Follow #grubmurder and watch it all unfold. 9 am EST is when the mayhem begins. Exquisite corpse, indeed…